You are here:
Press 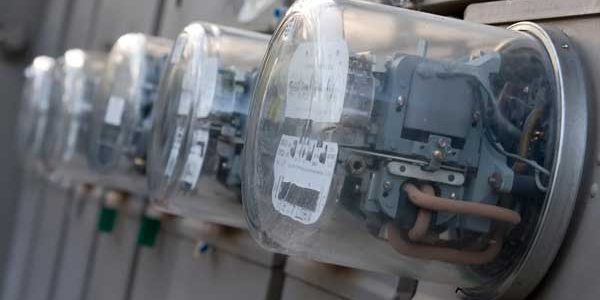 A small army of tree huggers was out last week for Arbor Day — and more will be out this month —  planting saplings across metro Detroit and the nation while also cultivating public affection for nature’s celebrated sentinels of shade.

As well they should.

But down a side street on Detroit’s east side near Grosse Pointe Park, a Detroiter gave hearty approval to a platoon of foresters on a mission there to destroy decades of nature’s handiwork.

“I am all for it,” said Dacia Robinson, 42, eyeing the trucks of DTE Energy’s tree-trimming contractors parked last week a block away. Robinson, still stung by memories of Michigan’s record power outage in mid-March, said her neighborhood had been cold, dark and bereft of power for eight days.

Cost of record power outage in Michigan continues to add up

“I’ve been trying to get DTE to cut down that tree in my backyard for years,” and last week “they finally came and took it down,” she said.

Thanks to the storm, millions of Michiganders like Robinson have had a stark reminder of what’s at stake when utilities answer the question, to trim or not to trim  — whether to preserve leafy bowers and risk an outage, or to mow down trees and limbs to keep power on through bouts of high wind.

Buy PhotoDacia Robinson of Detroit lost power for eight days in March. “I’ve been trying to get DTE to cut down that tree in my backyard for years,” she said. “They finally came and took it down” in late April, Robinson said. (Photo: Bill Laitner, Detroit Free Press)

As much political talk as there is about upgrading the nation’s infrastructure, accompanied by endless chatter about plugging advanced technology into just about everything, utility bosses say there’s no getting around their decidedly low-tech answer for ensuring uninterrupted electricity: It’s whacking more trees and tree limbs.

That was just the message when Trevor Lauer, president and COO of DTE Electric, addressed an audience of energy tech bosses and consultants last week. In a banquet room in East Lansing, at the annual members meeting of the Michigan Energy Innovation Business Council, Lauer spoke to hundreds of energy engineers and CEOs, nearly half of whom raised their hands when the emcee asked: “How many of you drive an electric car?”

Lauer told the group that no techno bullet could replace utilities’ sheer need to slice vegetation. Fully two-thirds of the time that DTE Energy customers suffer without power is due to falling trees and limbs, he said.

Lauer said he recently learned first-hand of his company’s need to trim wider corridors through greenery. It came right after southeast Michigan’s onslaught of winds as high as 69 m.p.h. on March 8. Lauer’s own house in Bloomfield Hills lost power.

“The vast majority of outages in that storm were caused by trees outside of our right of way,” a clear sign that utilities should slice wider swaths through tree canopies, he told the audience. 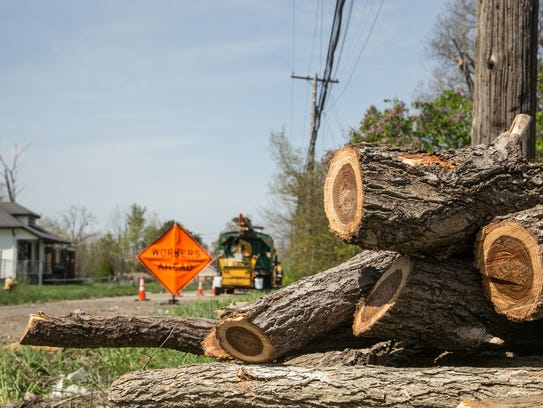 As for burying wires, although standard for new construction, it’s unthinkable for Michigan’s network of existing poles and elevated power lines, Lauer said. Seated on a speakers’ platform beside Sally Talberg, chair of the Michigan Public Service Commission  — which sets the rates utilities can charge Michiganders  — Lauer said bluntly: “It would never make sense to take a system of our size and underground it. The customers could never afford it.”

Thus, the choice that Michigan utilities have faced, seemingly forever, is the prospect either of accepting numerous outages or that of undertaking aggressive forestry in a climate where trees grow like weeds. But the stakes have risen in recent years, as state regulators pressured the companies to reduce their frequency of outages, amid calls from Washington lawmakers to provide uninterrupted power as part of improved homeland security.

Also, the power demands of the future will call for greater electric “reliability”  — the industry’s term for uninterrupted service, said Douglas Jester with 5 Lakes Energy, a group of consultants focused on Michigan’s energy policies.

“When you think about it, if we have electric cars as the dominant vehicle someday, every outage will become very disruptive,” Jester said, conjuring images of shiny fleets of battery-powered cars all marooned on roadsides. 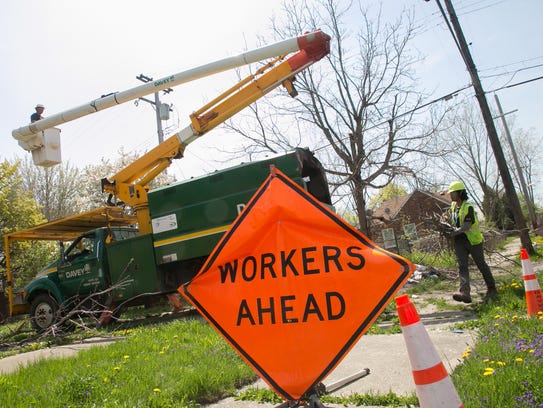 “A couple of years ago, we were at around 730 a day,” said Tolar, standing on a vacant lot while a crew from the utility’s contractor Davey Tree trimmed over, under, around and through utility wires in Detroit. The bigger strike force gives crews time to trim wider paths for the wires, said Heather Rivard, a senior vice president in charge of electric distribution.

“We used to trim to what is called a clearance circle, kind of a tunnel around the wires. Now the shape is more of a ‘U’ because we’re removing the overhang over the wires,” Rivard said. Moreover, the trimming now goes out for 15 feet instead of 10 feet  from the center line of poles and wires, and DTE Energy is fully removing many more trees than it once did, Rivard said.

In part, that’s because foresters have run into acres of dead ash trees killed by the emerald ash borer, the invidious green insect from Asia thought to have sneaked into Michigan aboard imported packing crates. The ash borer first appeared in Canton around 2002, then spread nationwide to devastate tens of millions of ash trees, according to Michigan State University.

Detroit-based DTE Energy said the March storm caused the most customer outages in the company’s 150-year history, knocking out power to an estimated 800,000 homes, business and other electric customers. Michigan’s other big electric utility, Consumers Energy, ranked the storm as among the company’s top dozen for most outages.

The Jackson-based utility, which has only a few electric customers in metro Detroit but a large service area across central and western Michigan, also has accelerated its tree trimming, spokesman Brian Wheeler said. The company spent $37 million on forestry in 2015 but $51 million in 2016, Wheeler said. A projection for spending this year wasn’t available.

At DTE Energy, the ramped up forestry has sparked controversy. In 2014, DTE Energy began cutting down more entire trees, calling the campaign “Ground to Sky.” That term soon fell harder than a 100-foot oak.

“There was a lot of backlash,” said Rivard, who truly is a rocket scientist, having majored in aeronautical engineering. In particular, the company struck a buzz saw of opposition in Oakland County. In Bloomfield Hills and Bloomfield Township, affluent residents on leafy acreage, as well as leaders at churches, schools and city halls, castigated DTE Energy for taking down towering trees.

Attorney Geoffrey Fieger fired off news releases, proclaiming that Fieger Law in Southfield had sued DTE Energy for an astounding $54 million on behalf of homeowners whose trees, Fieger said, were worth up to $100,000 apiece. Within months, by December 2015, Fieger said the case had been settled out of court.

“I can’t say what was done, but everyone’s very happy,” he said at the time.

Also in 2015, Royal Oak officials complained bitterly that DTE Energy foresters were despoiling their city’s sylvan heritage, a leafy legacy enshrined in the town’s very name. DTE Energy quickly backed off, dropping the phrase “Ground to Sky,” and it sent executives to meet with Royal Oak’s leaders while apologizing for contractors it said failed to follow rules for communicating with residents.

These days, the utility won’t remove an entire tree without getting a signed permit from the property owner, Rivard said.

“We’ll go back up to seven times to get that, and if we can’t reach them, we’ll just trim it,” she said. An exception? If the tree is dead, it must come down for safety reasons, with or without a resident’s signature.

“Bloomfield Township wants this process to work well for everyone involved” and wants crews to “do the best work possible to keep the power on,” Savoie wrote in February. Last week he said of DTE Energy that, “So far they are doing great.”

One solution to the debates and disappointment over trees and the utilities’ carnage is simple, although it requires years, even decades, to take effect.

By planting seedlings and saplings well away from wires and poles  — fully 50 feet away for species that grow way up there  — nature lovers can avoid the heartbreak of seeing cherished trees felled by utility crews, said Pete Smith, an urban forestry expert with the Arbor Day Foundation in Lincoln, Neb. Conversely, within 20 feet of power lines, gardeners should limit themselves to installing shrubbery and dwarf tree species, Smith said.

“It’s storms like you had in Michigan that really highlight the challenge of having trees anywhere near power lines,” he said.

A Carbon Neutral Michigan: What Will it Really Take? Douglas Jester Interviewed on the Speaking of Resilience Podcast
March 4, 2021

Companies Push for Fair Energy Rates in Michigan, Minnesota
May 5, 2017

Where the energy storage industry is happening now
April 4, 2017

Michigan has a choice: Make small cuts to energy use or build new power plants
March 2, 2017
Go to Top