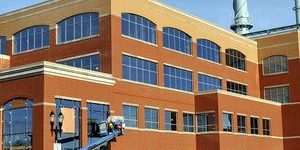 When we think of American manufacturing, the first place that should come to mind is Michigan. This is a state that knows how to get things done; Detroit helped create America as we know it by ushering the era of the automobile, and Michiganders know how to build the goods the rest of the country needs.

That still holds true for the products of the 21st century. Today, Michigan is a leader in building the parts needed for America’s fastest growing electricity source: wind energy. In 2015, wind was the largest source of new electric generating capacity in the U.S. and the cheapest, cheaper than natural gas and coal.

With 32 factories in the state that build wind-related parts, among the most in the country, Michigan is once again playing a big role in America’s move toward a better future.

In turn, this is helping people across the state. Wind energy supports up to 2,000 well-paying jobs in Michigan, and it has driven $3 billion of capital investments into the economy.

Wind power is also strengthening communities. Up to $5 million in lease payments are paid every year to landowners who host wind turbines on their property.

Wind farms also grow the tax base where they’re located, providing new revenue for schools, roads, public safety, libraries and services for seniors and veterans. By 2020, this revenue could surpass $11.6 million every year.

Wind power provides these benefits while keeping more money in the pockets of Michigan’s families and businesses. Through 2050, it could save almost $3.6 billion on electricity bills, on top of $10.9 billion in savings from protection against conventional fuel price spikes.

A specific policy helped create a lot of this good news.

In 2008, Michigan lawmakers passed a renewable portfolio standard (RPS) calling for 10 percent of retail electricity sales to come from renewable energy sources by 2015. Not only did the state achieve this target, it did so at considerably lower costs than projected. Because the law required a 50/50 split of projects—half to be built by utilities and half in a competitive market by independent power producers – prices were driven down even more.

Now, Michigan’s lawmakers once again have the opportunity to create more good jobs and savings for the state’s residents.

They can amend legislation currently under consideration to increase the state renewable requirements while maintaining the 50/50 project split.

Millions in consumer savings, thousands of good jobs and new resources for communities across the state- passing new legislation to further grow these benefits should be a slam dunk.

Liesl Eichler Clark is the president of the Michigan Energy Innovation Business Council, responsible for the creation of a business-friendly environment for the advanced energy industry in Michigan.